For nearly 34 years, Summit Partners has sought out the world’s great, bootstrapped growth companies. Today, we are pleased to announce our new minority growth investment in onXmaps (onX). onX is a special company based in Missoula and Bozeman, Montana. Eric Siegfried founded and bootstrapped onX to address a major gap in the outdoor recreation market – putting rich, interactive map-based information in the hands of hunters and outdoor enthusiasts so they can plan and navigate their journeys. onX is combining the power of the nearly ubiquitous global positioning receivers that are now in every smart phone with layers of mapping information to help users get the most from their time in the wild.

One of our core beliefs at Summit is that many great companies start with an entrepreneur’s deep, often personal understanding that there is some meaningful hole in the world – an opportunity missed or a problem left unsolved. The entrepreneur then put his or her head down to build the right solution. Often, they avoid outside capital, preferring to build their way and fearing that traditional capital sources could be disruptive to their culture or approach. Other times, outside capital avoids them, skeptical about whether the problem is important or the solution viable.

Having a bootstrapper’s mindset can be very hard in the early days. There is no capital to cushion air pockets. But, we believe it guarantees two things will be true if the company succeeds through these formative days:

1) The company will find product-market fit. By definition, customers will not fund a business via revenues if there is no market need or if the product fails to meet the need where one exists. Bootstrappers don’t have the luxury of venture capital funding with which to over-market or over-sell a solution that lacks market fit.

2) Founders and their team will control their destiny and timing when it comes to outside financing. Knowing their culture, business needs, values system, and personal and company objectives, they will have full self-awareness and control over when, with whom, and in what form they partner with investors and board members.

When we were introduced to Eric Siegfried and the onX team by our former partners at RightNow Technologies – Susan Carstensen, Jason Mittelstaedt, and David Vap, now at Yellowstone Growth Partners – we immediately recognized a special combination of culture, product-market fit, performance, and the rare blend of self-awareness and ambition that we find in many of the world’s great bootstrapped growth companies. Some might inquire skeptically whether it is possible to build a great growth company in Missoula and Bozeman, Montana. We had to look no further than who introduced us to onX – key team members at a Summit-backed company built almost entirely in Bozeman that went public in 2004 and was later acquired by Oracle for $1.5 billion in 2011. RightNow serves as a great reminder that world-class companies can be built in cities with populations less than 100,000, just as they can be built in cities of 10 million.

As we learned more about onX, three attributes stood out:

Serving a Market with Deep Passion and Affinity.
The onX team is comprised of outdoor enthusiasts and hunters who had all repeatedly experienced the same problem: although navigation and mapping are essential to both planning and the journey itself, the only available solutions were cumbersome and expensive. Most excluded critical information needed to plan and navigate an off-pavement adventure. onX’s team built the product they wished they had for their own use. As more hunters started using onX, word spread. For a tiny fraction of what many hunters spend each year, onX can transform the experience – allowing them to plan their routes, scout locations, observe precise property boundaries and land use, navigate and track their route, and utilize countless other capabilities to make their off-pavement adventure as rewarding as possible. And once they start using onX, they discover its value for fishing, camping, backpacking, motor sports, search and rescue, and many other outdoor applications.

Inputs and Outputs that Match.
It’s one thing to have a good idea, even a product that works. It’s another thing to build a business that works. Can it market and sell its products profitably? Can it retain its customers? Can it sustain its pace of innovation? Can it attract and retain talented team members? Can it achieve both top-line growth and bottom-line profitability? onX has the outputs that match the inputs.

The Mountain West Mindset.
Since 1999, Summit has partnered with more than a dozen companies in the five states traditionally considered to comprise the Mountain West of the United States. Since we work with entrepreneurs throughout North America, Europe, and Asia, why is it that a meaningful portion of our investments go to companies in a region that represents a tiny fraction of the total population? Maybe it’s the toughness and self-sufficiency that comes from time spent exploring the surrounding wilderness – climbing, hiking, hunting and camping. Maybe it’s that the region and people self-select, creating communities of individuals who don’t readily follow the herd. Maybe it’s because the region offers an attractive combination of challenging and rewarding jobs, with desirable work-life balance, cost of living, and recreational access. Whatever the reason, we see companies that are built to last – self-sufficient, disciplined, deeply customer-focused. 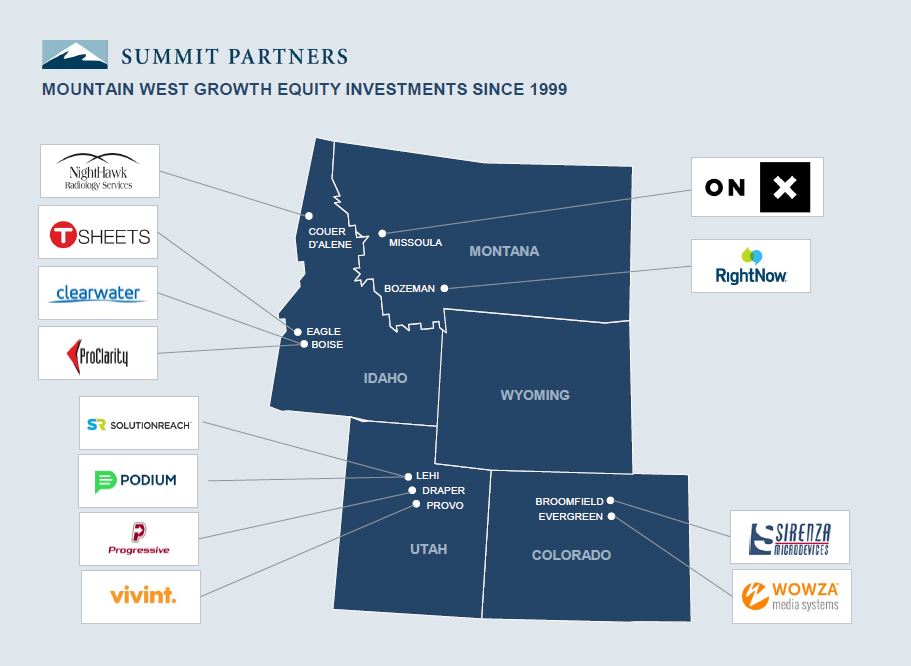 We are constantly amazed and inspired by the courage, vision and tenacity it takes to bootstrap and build a company. We are grateful to the entire onX team for inviting us to be part of this special company. We look forward to navigating this next stage together.

Since 1984, Summit Partners has invested in more than 475 companies in technology, healthcare and other growth industries. An alphabetical list of Summit Partners' growth equity portfolio companies can be found here.